I believe that the UK has a critical role on the world stage promoting co-operation between nations on issues of global importance, such as the climate emergency and opposing authoritarianism. I am opposed to isolationist policies and believe that the UK must do more to support diplomatic resolutions and to block arms sales to repressive regimes.  Above all, I believe that ethics and human rights should be at the heart of our foreign policy.

Across the world recent elections have seen the elevation of dangerous populist leaders, none more prominent than US President Donald Trump. These leaders have consistently exploited the economic concerns of working people to fuel anti-immigrant and racist rhetoric. I believe the UK must play a role in challenging these figures and calling out their dangerous language. It is shameful that the Prime Minister is more interested in flattering Donald Trump than meaningfully engaging with our European neighbours.

I was proud to join the Women’s March, following Donald Trump’s inauguration, and have joined protests on each of his visits to the UK. I signed Early Day Motion 2309 opposing the state visit of Donald Trump and condemned his virulent misogyny, racism and xenophobia. I have also made representations to the Foreign Office calling on the UK Government to oppose the policies of right wing governments on the climate emergency and use the international standing of the UK to challenge politicians like Donald Trump, Jair Bolsonaro and Victor Orban whose values are the opposite of those we hold dear. 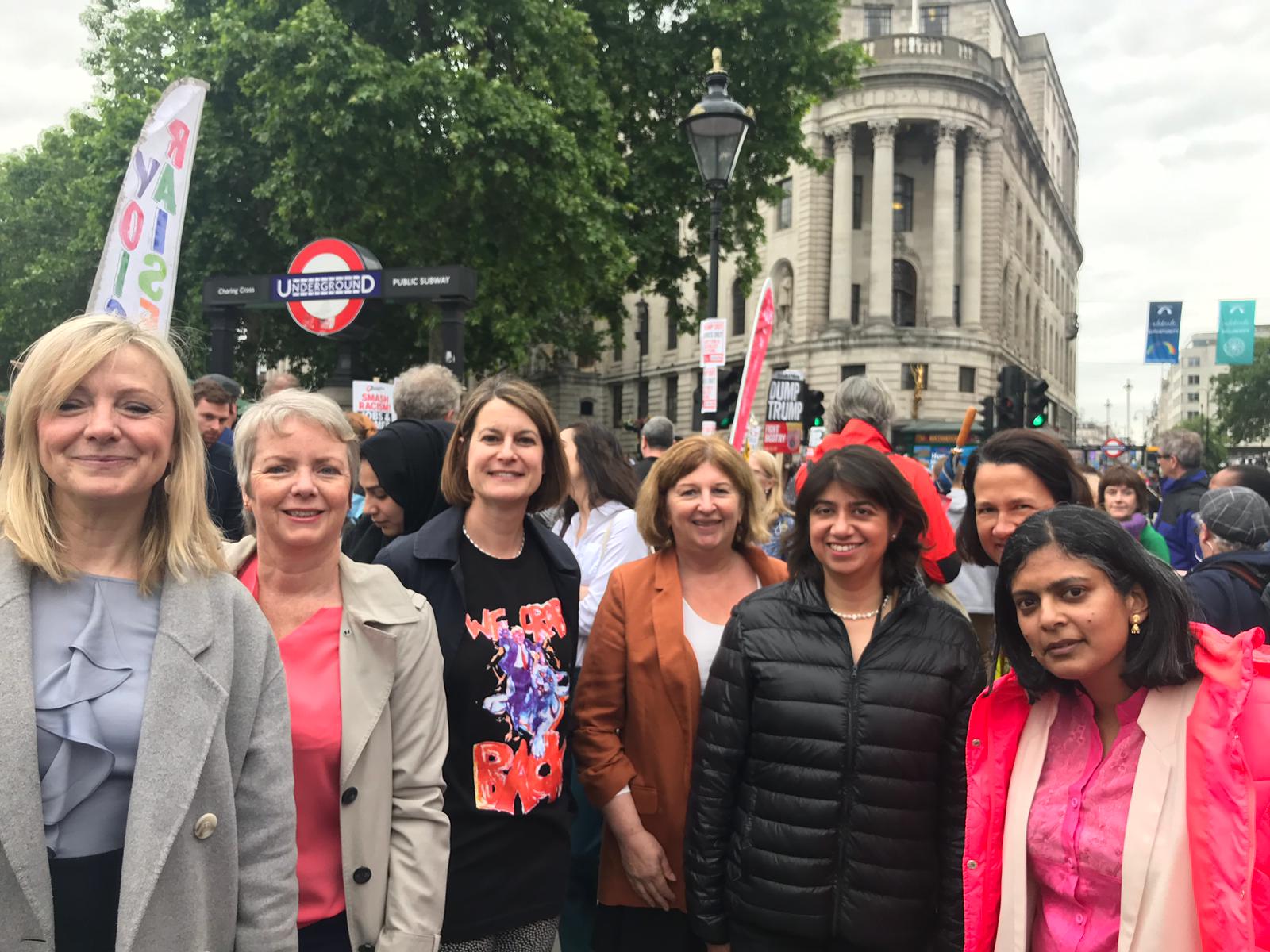 The past few years have seen increasing tensions and repression of human rights in China.

In Hong Kong, the Chinese Communist Party has introduced a shocking new security law which will diminish democratic freedoms in Hong Kong. This reneges on the 1984 joint Sino-British Declaration and the 'one country, two-systems' doctrine of governance. There is extensive evidence of human rights abuses against pro-democracy protestors and fears that this will become more common under the new security law.

Whilst I welcome the Government’s commitment to granting anyone from Hong Kong with British National Overseas status limited leave to remain in the UK, this will not help the majority of people in Hong Kong, it is clear that further action is needed by the British government in cooperation with international partners to press the Chinese government to ensure the continued democratic governance of Hong Kong under the 'one country, two systems' doctrine and freedom from oppression for all Hong Kong residents.

In Xinjiang, reports have documented the horrific treatment of the Uyghur Muslim community. This includes detainment in re-education camps, undermining the Uyghur people’s religious beliefs, and the forced sterilisation of Uyghur women. These reports are deeply disturbing, and I am clear that the Government must act with international partners to increase the pressure on China to allow international human rights observers into the region.

I have written to the Foreign Secretary on several occasions to urge increased action to protect human rights in Hong Kong and Xinjiang. The Government must adopt a more strategic approach to China based on an ethical approach to foreign policy which prioritises upholding and protecting human rights.

The situation in Syria is a tragedy in which more than 500,000 people have lost their lives, millions more have been displaced, and the physical fabric of a beautiful nation has been devastated. The repeated use of both chemical and conventional weapons by President Assad against his own people is utterly abhorrent.

In 2015, shortly following my election as MP for Dulwich and West Norwood, I voted against the Government’s motion to join coalition forces and undertake airstrikes in Syria.

I was concerned when Theresa May committed UK forces to military action in 2018 without the consent of Parliament and public debate. The Government must urgently establish an approach, working with international partners, to ensure humanitarian aid can be delivered to besieged areas of Syria; to work together with other members of the international community to hold the Russian government to account for their support for the Assad regime; and to vigorously pursue the Astana peace process.

In the absence of a coherent peace strategy in Syria and in so many other parts of the world, it is imperative that the UK Government steps up efforts to support and resettle refugees fleeing the conflict. I have consistently called on the Government to fulfil its commitments under the Dubs scheme and to expand support for refugee resettlement in the UK, including support for community sponsorship.

I am regularly contacted by constituents concerned about the ongoing conflict between Israel and Palestine. The tragic loss of life and large numbers of Palestinians who have been injured is very concerning, as is the humanitarian situation in Gaza and the terrible suffering that many Palestinian people are experiencing. The launching of rockets from Palestine into Israel is also completely unacceptable. The blockade of Gaza undermines basic human rights and economic prospects, as well as the availability of essential services. I believe that these restrictions should be lifted and I hope the Government will urge the Israeli authorities to go much further in easing them. I know that several organisations have documented extensive human rights abuses committed against Palestinian civilians.

I have written to the Foreign Secretary on several occasions to raise my concerns about the ongoing conflict and treatment of Palestinians. I remain committed to a two-state solution between Israel and Palestine with a safe and secure Israel living in peace alongside a viable state of Palestine and an end to the senseless cycle of violence. Violence does not further the cause of peace and there can be no justification for violence on either side of this conflict. I hope to visit Palestine with a delegation of other MPs later this year and I hope this trip will be helpful in continuing to raise my concerns in Parliament about the treatment of Palestinians.

Following the outbreak of the Ethiopian civil war in November 2020, I began to be contacted by residents in my constituency concerned about the safety of the family members. There have been widespread reports of human rights abuses and the repression of Tigrayan civilians by Ethiopian and Eritrean Government forces. Estimates suggest that around two million people have been displaced by the conflict and at least 10,000 women have been raped during the conflict. There is evidence of severe malnutrition as famine has spread across the region. Despite the tireless work of charities and NGOs in Ethiopia, roadblocks and attacks have prevented desperately needed aid reaching civilians.

Throughout the conflict I have been pressing the UK Government to intervene to investigate war crimes and end the use of rape as a weapon of war. I led a debate in the House of Commons in March 2021 and regularly raise the conflict in debates and questions to Ministers. At the time of my debate, this was the only debate on the conflict that had taken place in a western Parliament.

The Taliban’s rapid takeover of Afghanistan in August 2021 exposed the staggering complacency from our Government about the Taliban threat. Since then we have seen the tragic rollback of the gains that UK soldiers, diplomats and NGO workers, and their coalition and Afghan partners, worked so hard for. You can read my full thoughts on the initial withdrawal here.

Following the end of military evacuations from Afghanistan through Kabul airport, the Government must now support the safe evacuation of the British nationals and Afghans who have been left behind. Thousands of at-risk people eligible for resettlement in the UK remain in Afghanistan and I am concerned that few practical measures have been put in place by the Government to help them.

Since the end of the Kabul airlift, I have been working hard to support many of my constituents with family still trapped in Afghanistan and I am continuing to press Ministers to look into their individual cases. I have also been calling on the Government to open the promised Afghan Citizen’s Resettlement Scheme without further delays. This is desperately needed to offer a legal route to the UK for families facing daily threat from the Taliban.

Before I was an MP, I campaigned against the unnecessary military occupation of Iraq. The war cost the lives of countless numbers of both civilians and British military personnel. It was a fundamental mistake of the then Government to follow America’s lead based on insubstantial evidence and without the support of the UN or the wider European Union.

I believe this conflict posed fundamental questions for the UKs relationship with America which the current administration appears to have failed to learn.