The past year has seen many children unable to go to school or even to access learning remotely. This has set back decades of work to address the attainment gap between the wealthiest and poorest students. Every child should have access to high quality education to give them the best start in life, and as we emerge from the pandemic the Government must ensure every child is given the support they need.

Since 2010, the Tories have pursued an ideologically-driven programme of damaging and unnecessary reforms to our education system. The introduction of the free schools programme and large-scale academisation have created chaos in the admissions system, reduced the accountability of our schools and made it almost impossible for our Councils to plan the number of school places that are needed.  In addition, the Tories have cut the funding for our schools, forcing them in turn to cut teaching and teaching assistant posts, overburdened teachers with curriculum reform and reduced the amount of time children spend learning creative subjects at school. By needlessly scrapping the Education Maintenance Allowance the Tories also made it harder for 16-19 year olds to stay in education for longer.

Our children deserve far better than this. A Labour Government will invest in our schools and the wider education sector to ensure that from early years to career changes later in life and active retirement, everyone is able to fulfil their potential throughout life. 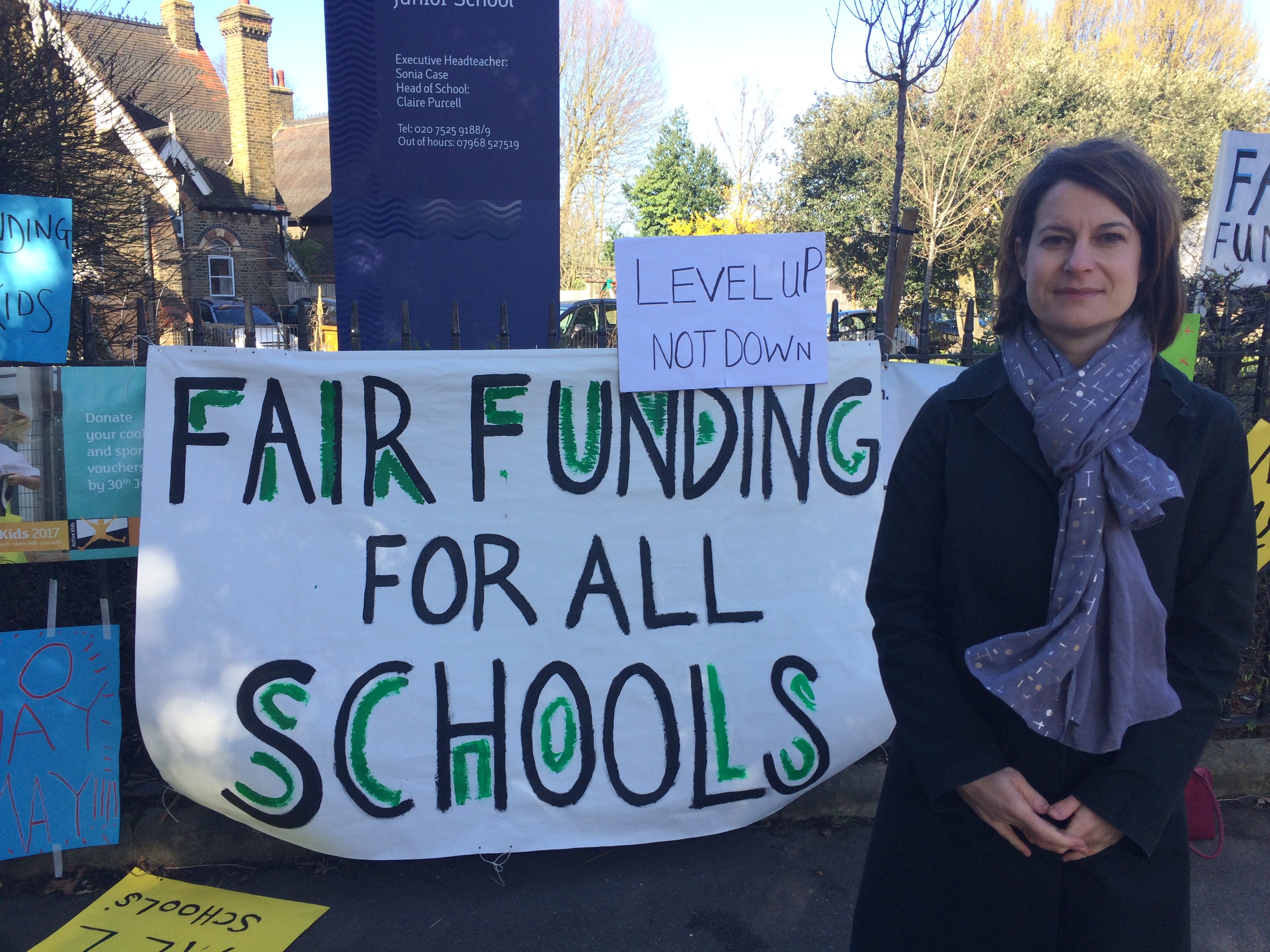 Our schools urgently need investment. The Institute for Fiscal Studies found that total school spending per pupil was cut by 8% in real terms between 2009-10 and 2017-18 by the Tories and Lib Dems in government. Analysis has found that school funding in real terms will be £1.7 billion lower in 2020 than it was in 2015. During the past year, the Government has shamefully failed to reimburse our local schools for all of their Covid costs. A whole generation of young people are being failed because of cuts to education funding.

I regularly visit schools across Dulwich and West Norwood and see the commitment of teachers and support staff to deliver the best possible education for our children, but I have also seen the strain this chronic underfunding has had on our excellent local state schools. In Parliament, I have been calling for the Government to fund our schools fairly, levelling funding up not down, so that our schools have the resources they need. Locally, I have joined teachers and parents to protest against the cuts.

Alongside reversing the damaging cuts to schools, we need to see actions to improve standards and outcomes across the school network. We have brilliant schools in Dulwich and West Norwood, but under the Tories, school standards have become a postcode lottery. Every child, wherever they live in the country should be able to attend an excellent local school.. The Tories’ neglect of schools has led to increasing numbers of valued and experienced teachers leaving the profession. The Government should be supporting teachers to build long term careers in education, utilising their skills and experience to drive up local standards. I will continue to fight for the best possible education for every single child.

I am proud to represent one of the most diverse constituencies in the country. Research by the Runnymede Trust demonstrates that the history curriculum taught in our schools, focuses predominantly on a narrow selection of key moments in history rather than a broader inclusive approach.

This has not only led to a low uptake of history at A-level and degree level among Black, Asian and minority ethnic students, but deprives all students of learning about the important role of migration in shaping our country and the influence of communities from across the globe who have come to make their home on these islands. From the Viking and Roman invaders, to Irish migrants fleeing starvation during the potato famine, to French Protestant Huguenots fleeing persecution, to the Windrush Generation coming to help rebuild the UK after the Second World War, the history of the UK is a history of migration. Using migration as a prism for the teaching of history allows each of us, on an equal basis, wherever our ancestors originated, to locate ourselves within it.

Working with the Runnymede Trust, I have been calling on the Government to reform the history curriculum so that every child can find their story in the history taught in our schools. Locally, I have supported young people from the Advocacy Academy in protesting outside the Department for Education and writing to the Secretary of State for Education to demand curriculum reform, and I am also working with Book Love and the Black Curriculum to help equip our local schools to teach history in an inclusive way.

Off-rolling is the practice of schools removing pupils they consider to be difficult or low-achieving from their register, so they are not included in exam results. Evidence suggests that more than 49,000 from a single year-group have been removed without clear justification. This issue disproportionately affects students from minority ethnic and disadvantaged backgrounds. Off rolling is a scandal and a key factor in increasing serious violence, with exclusion from school a common factor for many young people affected. It is completely unacceptable for academy chains to manipulate their results by letting down some of the most vulnerable children. I am calling on the Government to urgently act to prohibit this practice.

I am delighted to have been appointed in December 2021 as Labour’s Shadow Minister for Children and Early Years. There can be few things more important than making sure that every child has the best possible start in life. My role is to hold the government to account for the impact of their policies on young children, and this government’s record is truly dreadful.

The Tories have decimated Sure Start centres, established under the previous Labour government, which did so much to support young babies, toddlers and their parents with everything from play to nutrition, resulting in hundreds of closures. They have also slashed the funding for local councils to deliver children’s services, affecting the most vulnerable children, and children with special educational needs and disability. At the same time, the cost of childcare has sky-rocketed, contributing to the cost-of-living squeeze for millions of families with young children.

I’m looking forward over the coming months and years, to being a strong voice for children and families across the UK and here in Southwark and Lambeth.

I regularly hear from parents of children with autism or Special Educational Needs and Disabilities (SEND) who are struggling to get the specialist provision their child needs at school. Analysis by the National Autistic Society finds that 70% of parents of children with autism feel that support was not in place quickly enough for their child. Additionally, fewer than 5 in 10 teachers say that they are confident about supporting a child on the autism spectrum.

I believe that teachers should be given the knowledge and skills they need to be able to identify and support children with autism through the training they receive. The Labour Party has committed to deliver a strategy for children with Special Educational Needs and Disabilities (SEND) based on inclusivity, and which pledged to embed SEND more substantially into training for teachers and non-teaching staff, so that staff, children and their parents are properly supported. Labour’s last manifesto has also committed to make our country autism-friendly and committed to make sure autistic people are able to access the whole of their community.

In Parliament, I have consistently called for improved provision for children with autism or SEND needs in schools. I am a member of the APPG for Autism and I have been one of a small number of MPs who speak regularly in the House of Commons Chamber on the issues affecting autistic people. Earlier this year, I sponsored a debate on the use of restraint in schools and discussed my concerns about the impact this has on autistic children and children with SEND. I am proud to have worked with campaigners to organise the largest lobby of Parliament by autistic people, parents and carers in 2019, calling for an end to the use of hospitals for long term accommodation for autistic people.